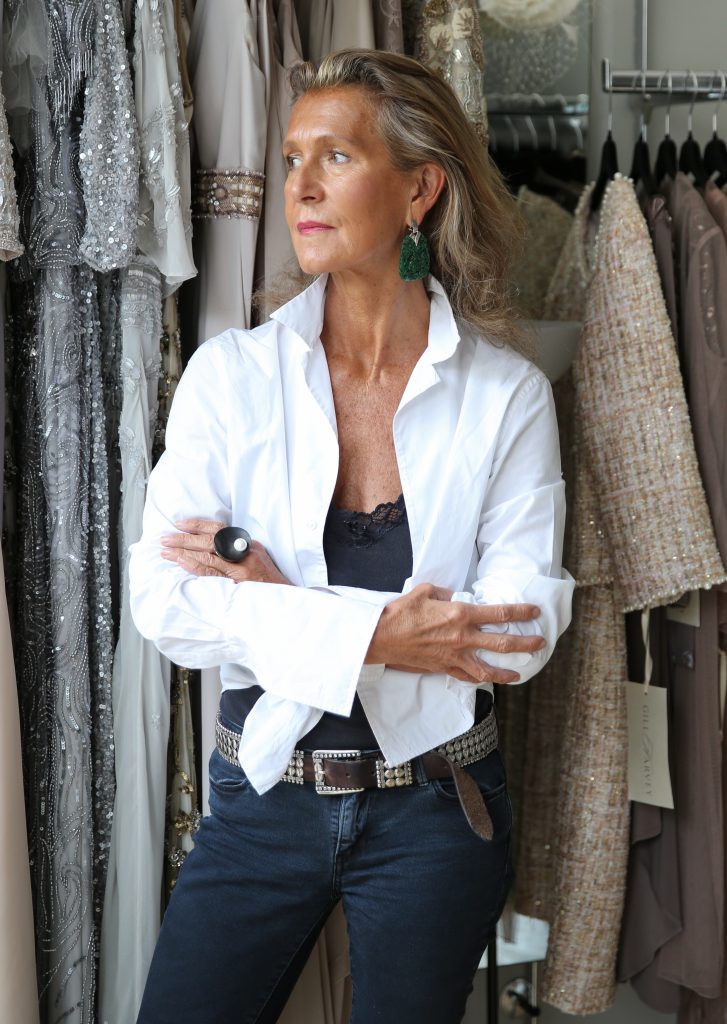 Gill Harvey – a loving tribute by her husband, Adam Sweeting

They say you don’t know what you’ve got till it’s gone, but everyone who knew Gill Harvey was in no doubt that she was a special person and a unique talent. Her visual flair shone through everything she did, whether it was the flowing contours and scintillating beading of her bridal gowns, or the playful and inventive window displays she devised for the Eliza Jane Howell shop in Connaught Street. The way she dressed herself was never pretentious but always casually dazzling.

She also had a remarkable gift for making time expand, always going the extra mile (or spending most of an afternoon) to make sure her customers received the absolutely perfect dress for their special day. Gill wore many hats, and she juggled them expertly. She could be designer, therapist and hostess with the mostest, always ready to calm the nerves of skittish brides or their fretful mothers with practical advice or a timely glass of prosecco. As veterans of the bridal trade know, the customer is not always right, but Gill made sure they always thought they were.

I first got to know Gill when we happened to live in the same block of flats off the Grays Inn Road. She was studying at Central St Martins and I was trying to be a music journalist, and she regularly hosted riotous parties with a colourful cast of fellow-students. The first time I actually met her was when a British Telecom telephone engineer, who was trying to repair my phone, cut hers off by mistake. At the time she’d been talking to her mother, who was on a cruise ship in mid-ocean, and an indignant Gill came storming up the stairs to complain.

Despite this unpromising beginning, we got along remarkably well for the next 40-odd years. After she’d endured a nightmare Masters degree course at the Royal College of Art, where she succeeded with flying colours even though her head of department took a sadistic delight in not acknowledging Gill’s very special set of skills, she began to carve out her career with labels including Medici, Medici Sport and Gina. Her expertise in creating Italian knitwear began to turn heads, and she was offered a job, more than once, with the prestigious Italian brand Missoni. But another of her traits was loyalty, and she chose to stick with her then-business partner Irving Goodman at Medici, driving the company forward with her energy and creativity.

It wasn’t nearly enough for her though, and it wasn’t until she launched Eliza Jane Howell that Gill really began to come into her own. She loved it because she finally felt she was expressing her true creative self, and her partnership with Andrea Cutts proved to be an inspired meeting of minds and a formidable combination of talents. In 2022, EJH’s Perfect 10 collection celebrated a wonderful decade in which Gill established herself as one of the most glittering names in bridal wear. Her success with an increasingly enthusiastic army of customers, from brides and mothers of-the-bride to celebs like Shirlie Kemp, Shirley Bassey, her friend and Hollywood icon Sharon Stone, the soprano Angela Gheorghiu and Strictly Come Dancing stars Shirley Ballas and Oti Mabuse, left her in serious danger of becoming a household name.

But she had multiple strings to her bow. If she’d decided to become a journalist, she’d have done it far better than me, and her gift for writing colourful promotional blurbs for her own creations was both hilarious and hugely impressive. She was a formidable natural athlete, and she ran marathons to raise piles of cash for the Hearing Dogs charity. On a working trip to Hong Kong, in between visits to factories on the Chinese mainland, she managed to prepare by fitting in 25-mile runs on the hotel running machine.

Her only problem was, as Joe Walsh sang, “burning the candle at both ends, twice the light in half the time.” She seemed to work about 37 hours a day, but she could always find time to remember birthdays and anniversaries and buy perfectly-selected gifts. When her mother was ill she made regular visits to Wales and even staged fashion shows at the care home, turning the staff into catwalk models. Yet she could always manage to come home and fling together a sensational risotto, a tuna and bean salad or a fabulous apple tart. Our fridge always carried a supply of her splendid home-made marmalade.

There was an agonising irony in the fact that Gill won Bridal Buyer’s British Design Talent Award in September 2022, just a few days after her death. I went up to Harrogate for the ceremony, not knowing that Gill was going to win, though Andrea was in no doubt whatsoever that the prize had Gill’s name on it. She was absolutely right, and as Andrea dragged me up to the stage with her to pick up the award it was amazing to feel the waves of warmth in the room towards Gill. And it wasn’t just sympathy for her horribly premature demise, but an acknowledgement that this was a much-deserved accolade for a true star and a fashion innovator. Gill had a favourite quote from Audrey Hepburn – “Life is a party. Dress for it.” It’s not a bad motto to live by.

The show goes on just as Gill wanted and her legacy continues in the capable hands of  Andrea,  Gill’s protégé designer Catherine Fisher, and the rest of her team.

A fashion graduate of  the Royal College in London, Gill Harvey first gained international success with her Medici knitwear collection.

Gill Harvey named Eliza Jane Howell after her grandmother who was also a fashion designer.

Eliza Jane Howell gowns are all hand-beaded and sometimes come with extra embellishments of hand embroidery.

Each dress is individually made by combining exquisite traditional and modern beading techniques and patterns.

It’s this blend of old and new that makes an Elza Jane Howell dress truly unique and an heirloom piece to be passed on to the next generation.

In 2017, Eliza Jane Howell was voted Best Bridal Designer for the second year in a row in the UK Wedding Awards.